Our Ancestors Hometown after Slavery

When we look at our ancestors we see varying degrees of color. A beautiful array in shades of the brown earth and alabaster.

Labeled; black, colored, yellow, negro, mulatto, passing white and the litany of other names that disrespect and strip away humanism. Names that reflect a past slave culture of property.

Those unfamiliar with the way of the South or too young to recall the one drop rule can’t quite grasp how the “white” ancestors were still considered black and subjected to the same segregation laws. Why those of color still suffered injustices after the emancipation proclamation. How Kemper, Neshoba, and surrounding counties led the parade of evil.

One of the leading genealogists in the United States, Elizabeth Shown Mills, a matching DNA family to our Johnson’s graciously led me down an educated path on Mississippi’s state of affairs with her recommendation in 2003 of the Report of the Joint Select Committee to Inquire into the Condition of Affairs in the Late Insurrectionary States.
This 1872 report is 13 volumes and lists testimonies from a government committee that investigated the Ku Klux Klan and other “clubs” that ran rampant in the southern states after the Civil War. I recommend reading volume 1 and 11-12 (Mississippi) if you are not acquainted with the evolution of the changes that kept freedom from becoming truth.

The Jim Crow laws legalizing separation between black and white were enacted mainly between 1876 and 1965. Kemper and Neshoba counties went beyond those wicked laws and their Ku Klux Klan presence intensified as years raged on. They terrorized those who challenged their laws and adapted the ideology of pathological killers; murdering someone who might have looked the wrong way.
The 1917 one drop rule in Mississippi was actually practiced decades earlier. If you had 1/8 of African blood you were considered black and segregated from whites. If you had one grandparent as black and three as white you were still considered black and it was against the law to marry white. For further understanding read F. James Davis’ explanation. He is a retired professor of sociology at Illinois State University. He is the author of numerous books, including Who is Black? One Nation's Definition (1991). An excerpt is listed here:
http://www.pbs.org/wgbh/pages/frontline/shows/jefferson/mixed/onedrop.html

When will people identify and be identified as humans instead of crawling into a labeled box created by a Southern slave culture?

In going back to the mayhem of the 1870’s in Kemper County, MS the list of shoot ‘em ups between townspeople was rampant. Add the lynchings and beatings of reported “ignorant negros” brings an ongoing cacophony of violence. Throw in poisoning of town folk for insurance pay outs and one can’t figure out why people continued to live in a region of evil.

Kemper County with a population of 12,920 in 1870 was known in the United States. Newspapers from the East coast to the West gravitated to the next tale of mayhem. One grand example was the Chisolm-Gully murders.

Several books on opposing views on the Chisolm-Gully murders were published in 1872 to highlight and or sensationalize the stories. These books are a must read for understanding the peril of our ancestors and to wonder how they survived guaranteeing our births. I will list the titles and authors at the end of this page.

The survival mode continued well into the civil rights era of the 1960’s. Just take a look at the movie Mississippi Burning based on the three civil rights activists murdered in Neshoba county and look at the road maps around Stallo, MS where our Johnson-Perryman homestead stood and the proximity of where they butchered the bodies. It wasn’t until January 6, 2005 that the leader of the killings, Edgar Ray Killen age 80 years was prosecuted, found guilty and sentenced to jail for three 20 year terms.

Another organization promoting Jim Crow laws was the Mississippi State Sovereignty Commission. It was state agency wanting to protect the State from interference of the Federal government from 1956 to 1977. It was basically a spy agency and profiled people associated with the civil rights movement it opposed. It promoted segregation and used monies to secretly fund the defense of Byron De La Beckwith for the murder of Medgar Evans. It passed information during Freedom Summer about the three civil rights workers; Chaney, Goodman, and Schwerner to the Sheriff of Neshoba County and other conspirators. The information included their license plate number making it easier to stop and subsequently murder them as noted above.

You can go online and see other family members names like Curtis Perryman attached here who was probably spied on because of his association as a school teacher who probably encouraged blacks to vote.

Our family stories listed here are not to demoralize the good men and women of these counties today. Multitudes of our family still live and love their communities in Mississippi. Yet we need to remember how they built from the ashes of post Civil War. How they came forward from the horrendous Jim Crow era. How our family survived and succeeded mainly through hard work and education. Let this be the lesson for our children.

The elders of the Johnson family acknowledge that color was meaningless to many of their “white” friends in the community. That division wasn’t created by all.

Still, we cannot forget those who perished by the times. The silent fear that continued as an undercurrent for decades after slavery.

While I have no personal experience of this past. I have ancestors whose limitations trickled down to my own father. Having to fight a harder go in life to be a better person. Having to educate one’s self because of the limitations of his father and so forth. I gained from their fight. I learned a work ethic and kindness. I was blessed.

Today, remnants of oppression still strike in our society. Whether it is the ongoing struggle of overcoming prejudice of color or women trying to be rendered powerless in society or business or some of our children being abused by monsters or the cry of homosexuals trying to be understood or simply the person who feels alone.
Struggles continue and have touched all of us in different ways and degrees.

We need to document, learn, and go forward. It is overcoming the odds we face and still projecting love and kindness despite what we may have experienced.
It is not wallowing in pity of being a victim. It is bettering our communities and finding the good in others. It is not whining, it is doing. Yes, it is hard work and these stories remind our children of the difficulties of the past and how their ancestors kept moving forward in peace. It is meant to inspire us all to keep moving forward with a glass half full. -Elaine M. Perryman

Take a moment to read this thesis written by Michael Brian Connolly. It is an excellent wrap up of the Reconstruction in Kemper County after the Civil War. Our John "Jack" Johnson is listed as one of the few black farmers property taxpayers in Kemper. In addition many of our descendants DNA contributors namely; Phil Gully, Philander Hull, Jack, and Rosenbaum are amongst those written about in the thesis.: It is difficult to categorize this newspaper clipping shared by Robert W. I can only say it is peculiar ! This story is about Wiley Dempsey Rowe, Jr who was the son of Wiley Dempsey Rowe, Sr. (who was murdered as shared in another newspaper article below.) Wiley Jr's mother was Brookie Perryman, daughter of Mary Turner and Walter Perryman .

In no particular order. Under Construction.

Click Button for Page on LaFon including autopsy report. Other readings below.

Click Button for Page on Isaac. Other readings below.

Hattie, the daughter of William Johnson 1850 murdered her husband and was pardoned by the Governor after going to Parchman prison in 1929. Click on button for page link.

Wiley Rowe (husband of Brooke Perryman) was murdered in August of 1932 at the home of his father-in-law, Walter C. Perryman by a neighbor, Les Culberson. Please read below and contact me if you want to help a young law student who is doing research on this case. She is looking for a perspective on the racial strife that was experienced during those times and after in Kemper County. In addition, we have the Shield's surname (one of the men convicted) in our family history.

On March 30, 1934, a farmer named Raymond Stuart was killed. It was possibly a robbery gone wrong. The three men arrested without probable cause were: Henry Shields, Ed Brown, and Arthur Ellington. Their conviction was based solely on false confessions resulting from beatings at the jailhouse. After conviction the Supreme Court unanimously reversed the decision in a 1936 ruling that confession extracted from police violence violates due process. This ruling paved the way for the Miranda decision years later. Photo from the Cover of Crisis magazine, April 1935 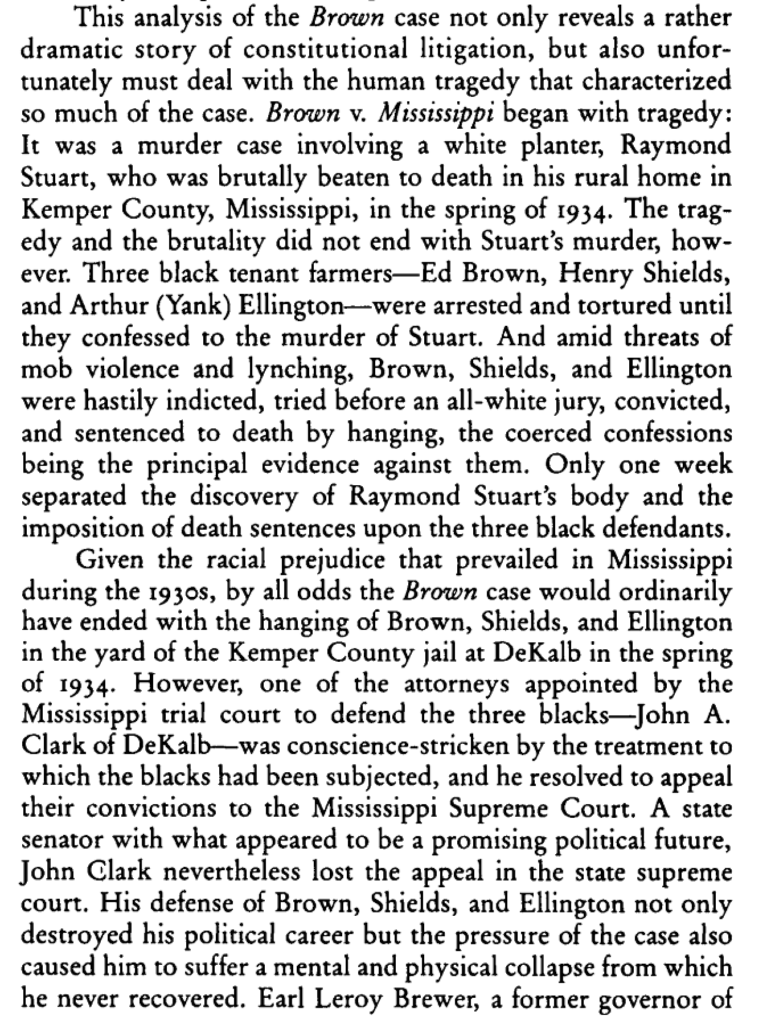 John A. Clark by Richard C. Cortner (an excerpt from his book) 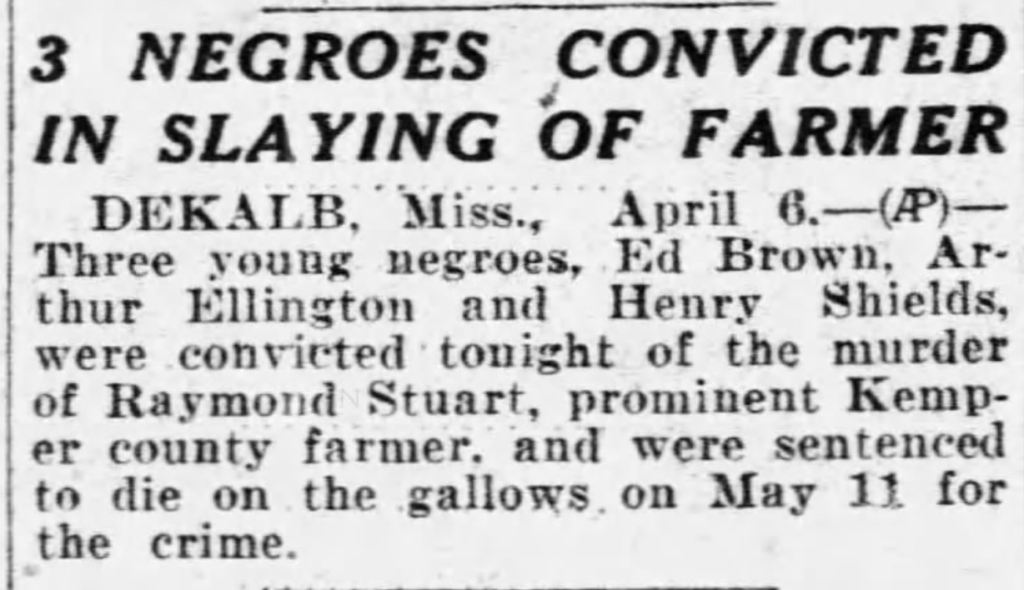 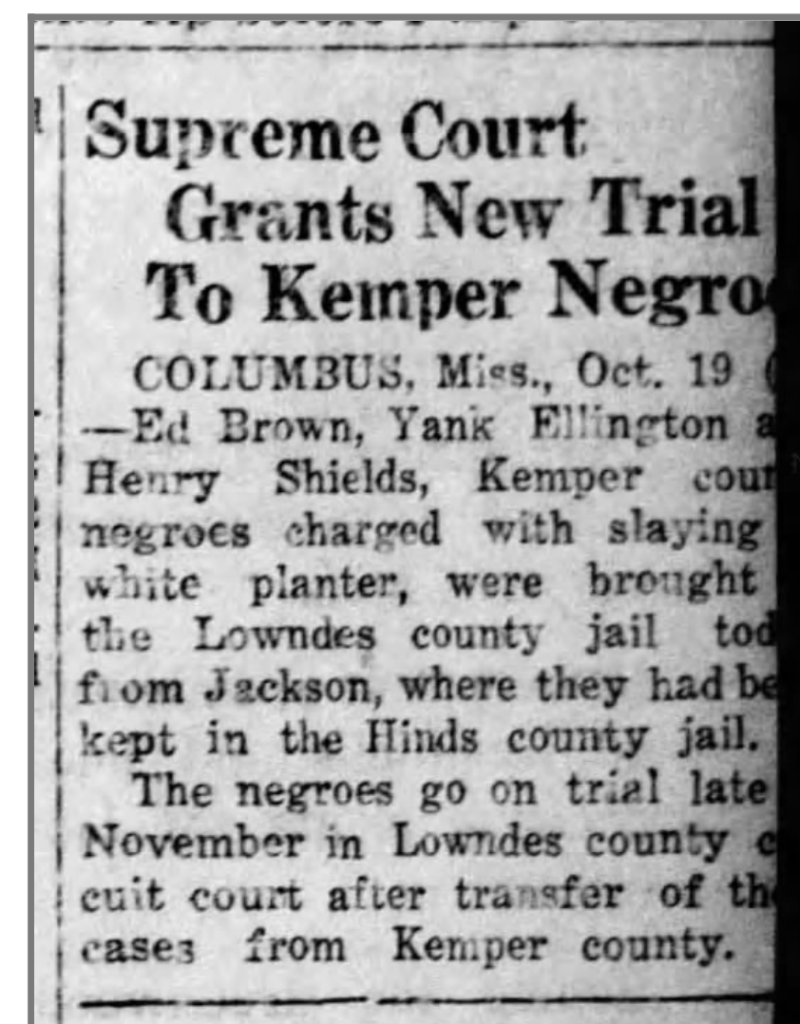 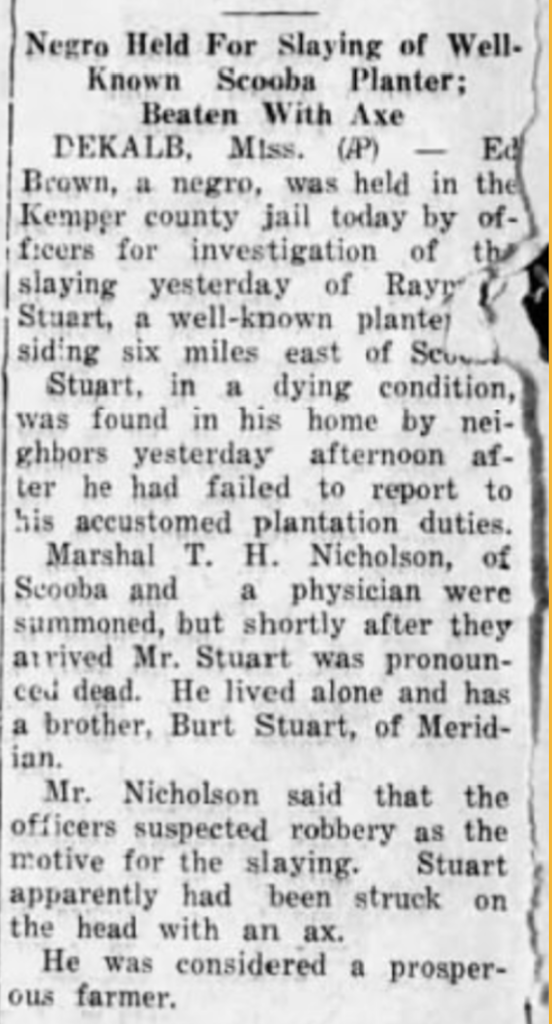 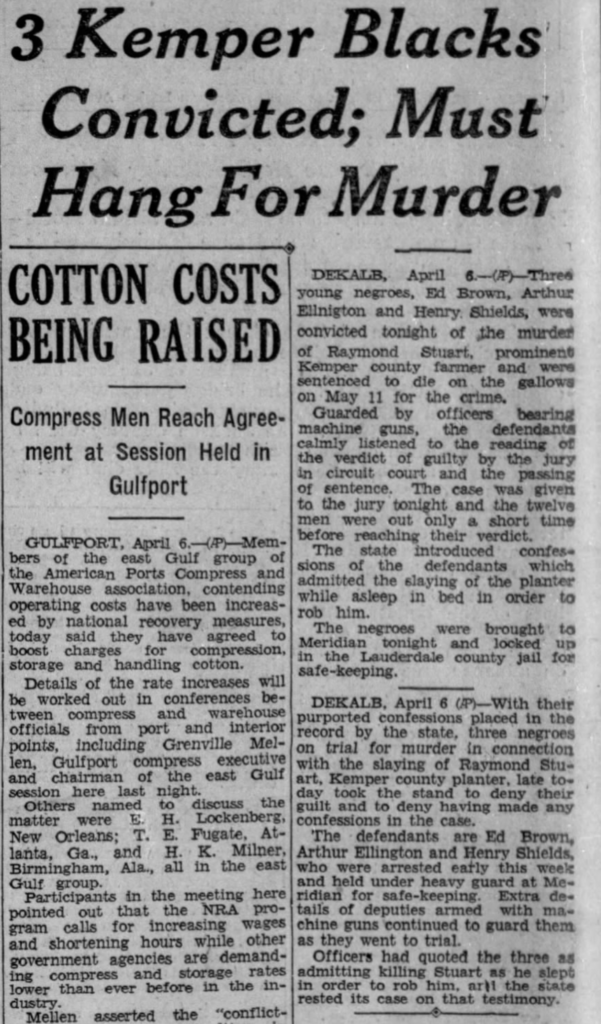 Report of the Joint Select Committee to Inquire into the Conditions of Affairs in the late Insurrectionary States
Is now available online:
http://onlinebooks.library.upenn.edu/webbin/metabook?id=insurrection1872

Books written on Kemper and Neshoba County including opposing views:

-The Chisolm Massacre: A picture of “Home Rule” in Mississippi by James M. Wells, 1877

-Bloody Kemper: A true story in Mis’sippi by Hewitt Clarke, 1997

-Witness in Philadelphia by Florence Mars, 1977

These are just a portion of the books written about Kemper, Neshoba, and surrounding counties. I suggest reading the newspapers of the times too. They are available online.

This is just a small portion of the writings of the testimonials about Kemper, Noxubee, Neshoba and surrounding counties. Please go to above online link for more reading.
Click to enlarge 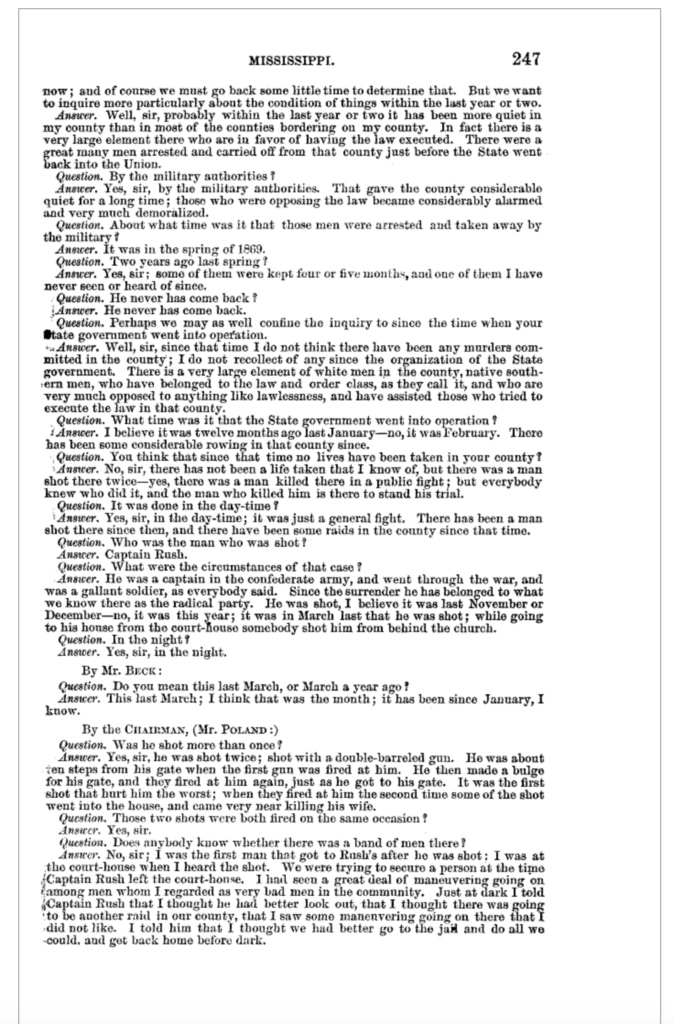 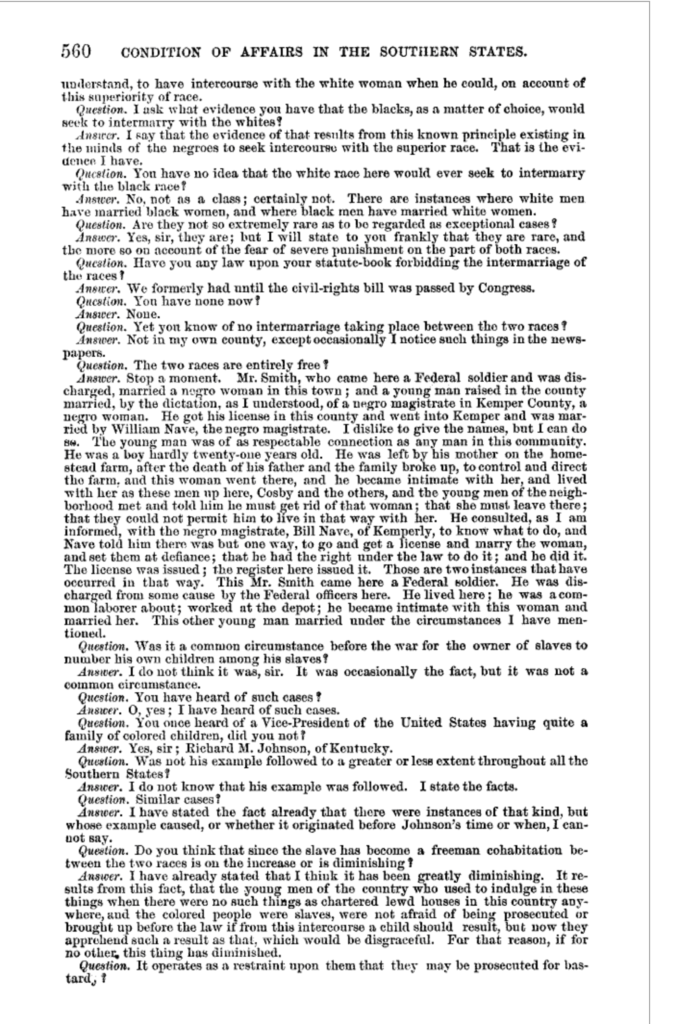 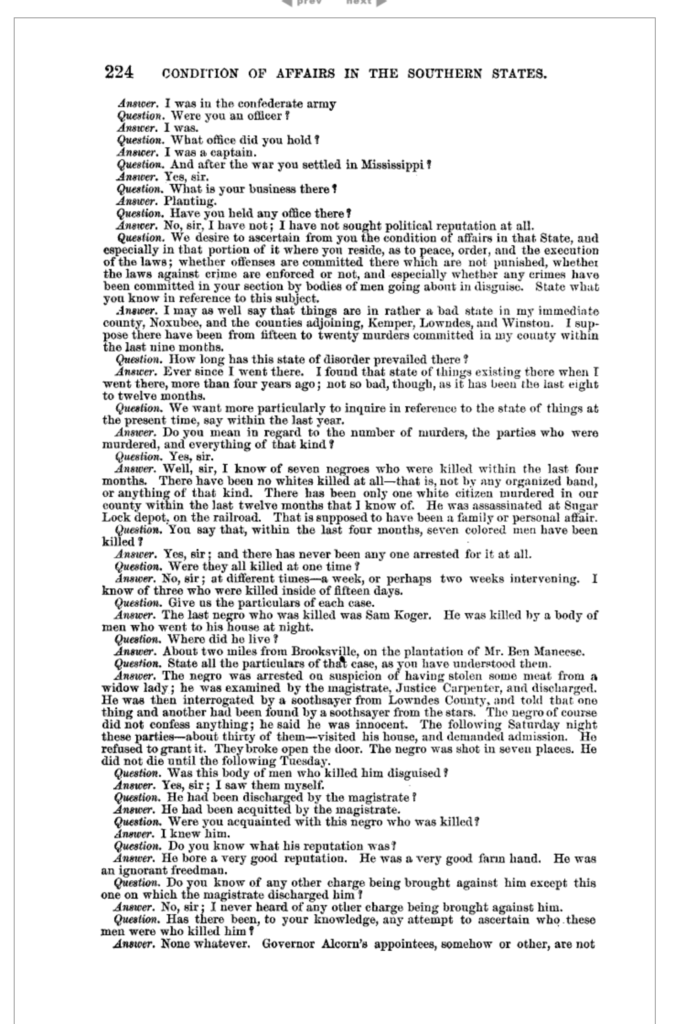 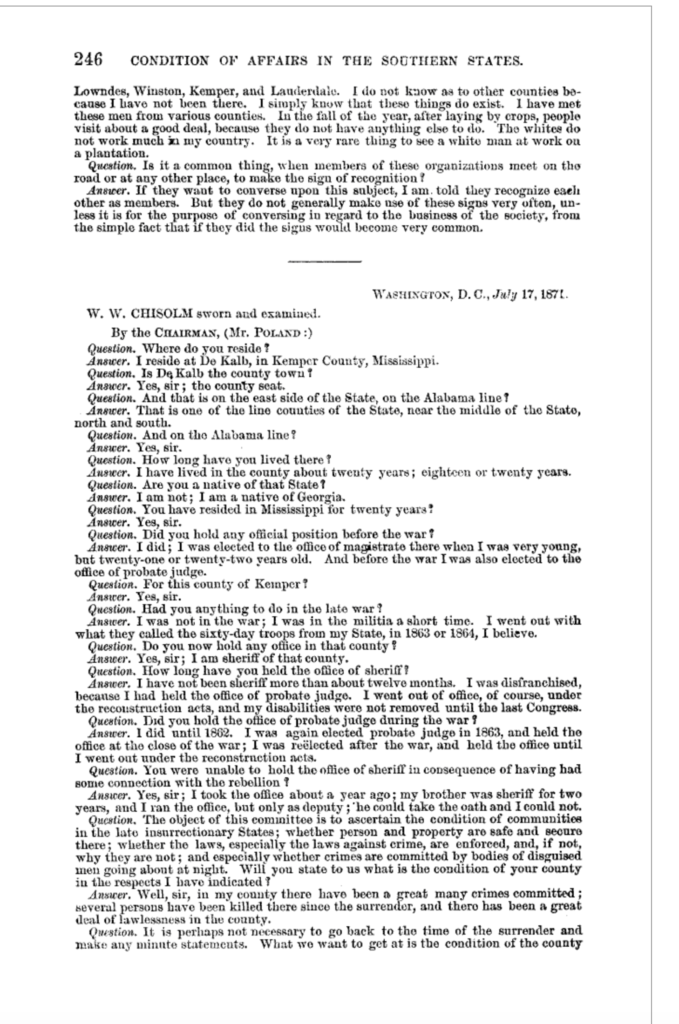