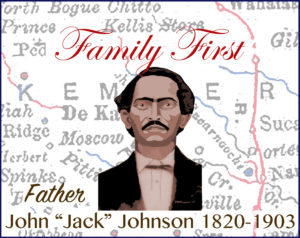 Go to News and Updates page to see recent additions.

Click on titles at the bottom menu for easiest navigation. There are over 50 pages to this site.

Please be patient and check back often as we relocate hundreds of files, research, and photos of our Ancestors to this website. Contact us with any corrections or questions. Frequently, our ancestors dates of birth and death vary on different documents including wrongly chiseled gravestones. We list according to many factors. We welcome submissions. Please share by contacting us at this site.

Please cite this website if information used is found here. A citation acknowledges our research and hard work. Also, it connects family to the site and each other.  Thank you!

John "Jack" Johnson, our progenitor was born between 1820-22. Jack was enslaved in North Carolina, Alabama, Louisiana, Mississippi. Oral history suggests unconfirmed locations of Tennessee, Virginia and the Caribbean Islands. Jack brought his family together in Kemper County, Mississippi to flourish amidst racial strife. Jack had twenty children. The first ten children were with a slave named JoAnna. The names Carolina and Abby Jane are part of documentation and an explanation of Joanna's MtDNA is shared in a report under the page called WIVES.. These descendants were known as the "first set". The "second set" were with wife Hettie Brown. Hettie Brown, born in Alabama was raised by her mother Louvenia Brown. She was Jack's wife after enslavement and bore him ten children.
Strength of family, hard work, and education created successful and loving descendants.

John "Jack" Johnson traveled to several states and searched plantations to bring his separated children home after the Civil War. Jack found and gathered 9 of his 10 children that were enslaved. He couldn't locate one child named Rufus. He never stopped looking for his child till his dying day. His son Henry Johnson continued to search as well after Jack's death.

For over a hundred and fifty years the family gave oral history about Rufus Johnson. Many thought it to be folklore. Many believed. Many were saddened by the story. I was one of the the descendants filled with sorrow and determined to find what happened to Rufus. I have found documentation that one of our family's slaveowners died in 1856 and that Rufus was distributed after the estate was probated in a Greene County, Alabama court. He and other family members were nothing more than a piece of property listed with the mules and horses.

On New Year's Eve, December 31, 1856, Rufus was carried away from the Port of New Orleans to the Port of Galveston on the steamship Atlantic. Rufus was taken with two other slaves to Cuthbert Lewis Price's plantation on Price's Mountain in Anderson County, Palestine, Texas.

On New Year's Day 1857, ten year old Rufus awoke without his family. He never saw them again. He never experienced their love again.

We are searching for the possible descendants of Rufus to unite the family for Jack Johnson.

This site is for descendants of John "Jack" Johnson. A page is dedicated to each of his children's descendants. A branch of your Family Tree will be listed on each page. We will not post surnames of living individuals. In addition we will have sections for photos, historical and current stories. This is a public site so be mindful of what you want posted. Privacy is based on your own contributions. Send via the contact us link or by personal email. Advise if you want to be point person for your branch.

Most of our kits are from FTDNA: Family Tree DNA. Other kits are housed at Ancestry, Heritage and 23 and me. We encourage kits to download data to GED Match a free site based on donations to bring together results from all three DNA companies. If you want further information on sharing DNA in our family please contact us regarding Autosomal DNA, Y DNA, and MtDNA Register for updates on Family News via Contact Form